Global shares fell 0.8% and 0.4% in hedged and unhedged terms, respectively. Global equities were influenced in part by volatility in US markets. Sizeable retail-initiated positioning in certain small stocks triggered de-leveraging (selling positions) by investors and contributed to broader market weakness. In addition, concerns additional stimulus would not be forthcoming weighed on the US market. 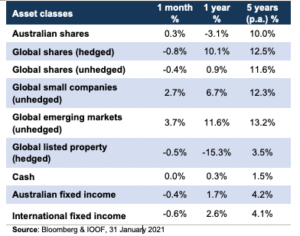 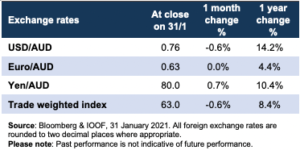